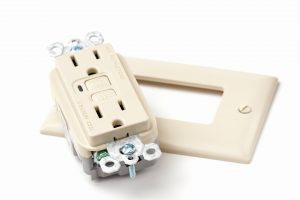 We often get concerned homeowners asking us about the differences between GFCI outlets and your average, everyday outlet. Actually, these are great questions to ask, since there’s a huge difference that many people outside of the industry don’t know. So, in case you’re one of those people, we’ve written this blog post in hopes that you can find some of the answers you’re looking for!

GFCI outlets, or ground-fault circuit interrupter outlet to be more precise, is a type of outlet that you can have installed in your home that which has the capability to limit the causes of many electrical fires in the in our area and around the country. You’ve probably got a few outlets in your bathroom, but in a place where there can be so much water splashing around and, it’s worth listening to what we have to say. As any electrician in Kerrville, TX would tell you, the difference between installing a GFCI outlet and a normal outlet can be major in the event of an electric shock.

Don’t take a risk that you don’t need to. Keep reading to find out more.

This is the first and most important question homeowners ask us. What really is the difference between GFCI and normal outlets? Well, GFCI outlets are protected by a monitoring system that watches the power going to a device that’s plugged in. If there is an imbalance in the power, i.e. from flooded water or anything else, the GFCI trips the circuit and shuts the outlet off. So, if you’re using an electric hair dryer and accidentally drop it into the sink, the GFCI can detect that there’s an interruption in the current and it immediately cuts the power. As opposed to a normal outlet that will then have unfettered and dangerous electrical current flowing through your bathroom that could cause a fire or hurt you.

“How Often Does This Matter?”

Well, that’s a tricky question. How often does your smoke detector matter? Some people will say never, some people will say all the time. The truth of the matter is, a GFCI is meant to protect you when something goes wrong, which can be always depending on how you look at it. Especially when it is in a bathroom or an outlet outside, your electrical current can be dangerous when mixed with water, the elements, or even a faulty appliance.

“How Expensive Is It?”

Not as expensive as you’d think. For such a smart and protective device, you’d assume it would be more expensive than it is. GFCI outlets are only a few dollars more than regular outlets but this is not really what you’re paying for in most cases.

The most important part you’re paying for when you buy new GFCI outlets, is the proper installation by a professional team. A poorly installed GFCI outlet is just as bad as a normal outlet, just more expensive. That’s why you don’t want a group of amateurs installing your GFCI outlets. You want the best.