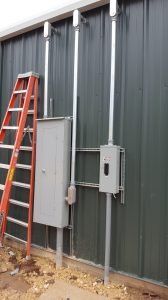 Power surges are one of those things that only comes to mind when you’re affected by them. You know the phrase “lightning never strikes twice?” That phrase exists because nobody is ever expecting to be struck by lightning more than once, from just how rare an event it is.

But as anyone in Boerne, TX knows, it’s not just getting struck by lightning that’s the problem. When lightning strikes a power line, breaker box, or your property, it could spell disaster for all your electronic devices. Cheap, store-bought surge protectors can only go so far. What about all your devices that aren’t connected to a power strip? Would you risk them being fried by lightning?

Of course not. Easy enough for you, we offer affordable whole-house surge protection.

What Does It Do?

Normally when lightning strikes your house or a nearby powerline, it can overload the circuit breakers causing your electronic devices to fail. This can be fatal to any piece of equipment with a motherboard or microchip because it can literally fry the chip with the excess energy. Fortunately, with a whole-house surge protection system, there is a split at the breaker box with a powerful surge protector. Much like a pressure release valve, it either blocks the flow of electricity before it pours into your home circuits, or it grounds the charge. This disperses the electricity safely and effectively away from your sensitive devices.

Why Does Surge Protection Work?

Surge protectors limit the voltage supplied to electronic devices with the use of inductors, which inhibit massive, sudden changes in current. This could work just fine in a normal power strip, but lightning and other storm surges can give sometimes 100,000 volts or more! That’s enough to blow the lid off of any conventional power strip. However, whole-house surge protection can defend against large electrical currents much more effectively than a power strip.

People think that “sensitive electronic devices” doesn’t apply to them, since they might not always be charging their phones or their laptops. But many more appliances might run on these sensitive chips or motherboards than you think!

Every AC socket in your home is connected to the main circuit board. This means that one powerful strike of lightning can completely knock out every socket in your home, requiring thousands of dollars in repairs. You’ll be powerless, frustrated, and down a lot of money.

What about your kitchen? Refrigerators often have chips, regulating temperature and displays. Ovens, (especially with electric stoves) use microchips to regulate power and temperature as well. You see, so many appliances these days operate with chip technology that you could end up losing thousands of dollars (sometimes even tens of thousands of dollars) in damages from one power surge.

Don’t try to install whole-house surge protection yourself. Contact D’Spain Sales and Service for an electrician in Boerne, TX. Don’t wait until it’s too late.