Problems with Your Ducts Can Be Serious 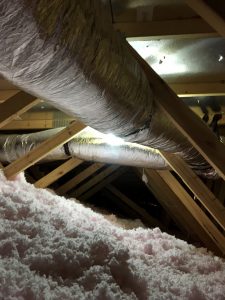 The ducts in your central heating and air conditioning system serve to move conditioned air (cool in the summer and warm in the winter) from the main unit to the various corners of your home. Most of the time, those ducts do their job without complaint. In some cases, however, problems can occur. When they do, they can be a serious issue, and while it might not sound like much, it can develop into a very expensive repair call.

Problems with ducts tend to develop in one of two specific ways. The ducts can be inadvertently damaged during work on other parts of the house (or alternately, when animals like squirrels and raccoons crawl into your attic or other space and damage it with their antics.) Far more common is a leak or a breach caused by the separation of two sections, usually because a bolt or a fitting wears out. Regardless of the cause, however, the effect is quite serious.

When a leak or a breach appears in your ducts, it will either pull conditioned air out of your system or pull unconditioned air in. That means that your air isn’t as cool as it should be, which in turn forces your air conditioning to work harder to do the job. Monthly bills will go up and the added strain will increase the chances of a more serious breakdown in the future.

Never attempt to diagnose or repair problems with your ducts yourself. That requires the attentions of a trained professional with proper licensing and training. But you can spot the signs that there’s a problem if you know what to look for, at which point you should shut the system down and call in a repair service. Common signs include (but are not limited to) the following:

If problems develop in the ducts of your Boerne, TX home, shut the system off and give the professionals at D’Spain Sales & Service, Inc. a call!